Gary SchenauerPhoto Uploader5 年以前
The "Fighting Omars" are out of NAS Oceana. The "Arctic Splinter" camo paint on their legacy Bugs is fantastic! And it isn't very often when I can get a good close shot of the tailhook, so I like how this picture came out.
Report

Torsten Hoff5 年以前
What is the blue thing on the hardpoint under the left wing?
Report

davesheehy5 年以前
Hi Gary! So you knew I would be making repeat visits to this picture...LOL! I will shoot you an email later on.
I saw the question earlier today about the blue thing. I am guessing that the blue paint means it would not used as a combat load out?
This picture totally rocks! This should be a recruiting poster for the Navy! What aviation geek kid would not want to fly this sled? 5*++
Report

Jim Quinn5 年以前
Just curious about the camouflage. Where would this likely be effective? I assume it would be for ocean operations much like the camouflage on ships during WWII, but I've not seen this scheme before now. Fascinating and really good-looking art work.
Report

Dwight Hartje5 年以前
Another awesome pic of this beautiful bird, Gary! I have a question about the blue missile, is that for practice?
Report

Gary SchenauerPhoto Uploader5 年以前
Dave, Thank you for the great compliment about this pic. ;-)
And I inquired at Fallon and I've been assured that anything painted that shade of blue is, as you surmised, an item used for training missions only.
Jim, this particular camouflage scheme replicates the scheme used on SU-35 Flanker-E a/c. Over snow-covered or arctic-style terrain, as well as over water surfaces, it is a very effective camouflage pattern. I've never looked down (from the air) upon any a/c wearing this garb, but I can definitely attest that when the skies are cloudy it is extremely difficult to see any a/c so clothed and even when the sky is blue as it was here these a/c are more difficult to spot when they are at altitude than traditionally "gunmetal-silver" Hornets (perhaps because the dull subdued paint does not reflect sun as well). Over ocean or sea surfaces (which are also deep blue), I believe they would be just as invisible. Also, if the belly tank and that dark blue jamming pod were removed (since they are dead giveaways that they are on the underside), the paint pattern makes it, at first glimpse, difficult for a person, (even someone viewing it as close as it was to me) to quickly determine the configuration it was flying in (ie: right side up, upside down, breaking left, etc.) It really is an effective scheme in a variety of environments. Good question; TY for asking. I hope that a military pilot might someday see your question here and provide his / her perspective about this camo scheme. :-)
Hi, Dwight. TYVM for your comment and compli. That blue missile on the right wing tip is an inert CATM (Captive Air Training Missile) Sidewinder. To be absolutely honest, I do not know anything about the one on the left wingtip except this: that blue band about 1/3rd of the way down its length indicates an inert component so that leads me to believe that it, too, is used only during training / practice.
Report

Gary SchenauerPhoto Uploader5 年以前
Hey, Uwe. Thanks, my friend. I am just checking out your newest posts. :-)
Report

davesheehy5 年以前
Man, if I wasn't so old I would join the Navy... :)
Report

David Seider5 年以前
Hi, all!
I'd like to share some info on the pod that this Bug is carrying on its port wingtip: I believe that this is an ACMI pod.
http://en.wikipedia.org/wiki/Air_combat_maneuvering_instrumentation
http://www.cubic.com/Portals/0/11741_004%20Air%20Combat%20Training%20br_reader.pdf
Under the port wing, the bright blue pod is, I believe, an ALQ-167 EW pod - or something similar.
http://fas.org/man/dod-101/sys/ac/equip/an-alq-167.htm
http://www.rodaleelectronics.com/products/an-alq-167/ew-training-pods/

Hope that this provides some additional knowledge!
Report

Gary SchenauerPhoto Uploader5 年以前
Corsair ... The info you've linked me (us) to is super!! These explain everything perfectly! I truly appreciate the links you've provided, and I'm certain there are others who will, too. Many Thanks for this info. (Two Thumbs Up and a wave) :-)
Report 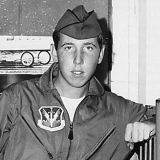 Gene Pardee5 年以前
This appears to be a paint scheme for use by "aggressor" aircraft for war game training.
Report