This poor looking airplane is parked on a little square plot of land in a small town just outside of Ft. Huachuca, AZ (KFHU). I've seen it for a very long time just parked there along the highway in this sorry state of repair. The lady living next door thinks it belongs to a former mayor, and that he flew VIPs around in it, I guess while he was active duty. Anyway, I'm not 100% sure of the serial number, but this is the closest I could get with Joe Baugher's info:
Beechcraft L-23 (U-8) Seminole, 57-6032 Beech L-23D-DH Seminole to MASDC as UB061 Mar 1, 1979, to 3U0018 (Navy) Feb 13, 1981.
The number on the left side of the tail (missing the rudder) shows: 0-76 (I think it's a 6) and on the right side it shows: 032. I believe it is actually 57- based on some pics of other L-23/U-8s that also show a 0- but have the serial number actually start with the year. If I can find out more info I'll post it. And if anyone knows more about it please let me know. Also, I have more pics if anyone is interested.

SAM PIERCE6 年以前
Thanks Greg, I like a good mystery.
Report 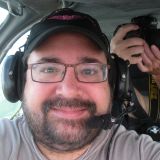 Andrew Rodriguez5 年以前
Anything new on this?
Report

Greg ByingtonPhoto Uploader5 年以前
Nope, not yet. I've tried to do some searching online but haven't come up with anything. I might have to just go up their local (small) PD or town hall and ask around. I'm just not sure if it might be a touchy subject, or not. Anyway, I haven't forgotten about it, and I'll let you know if I get more info.
Report

Andrew Rodriguez5 年以前
I believe this to be a former RU-8D, that would have been converted back to the U-8D standard in the early 1970's after the aircraft served in Vietnam. As a former reconnaissance aircraft and it's located so close to Ft Huachuca and home of the Military Intelligence School can't be a coincidence, but I sure would like to know the story and what the plans are for it. I believe prior to its current location it was at a Aviation Tech School in Douglas, AZ I just posted a wartime photo of the aircraft http://flightaware.com/photos/view/272106-1b8dfed799a9d869956eaeaba10f2bcec6b70385/all/sort/date/page/1
Report

Greg ByingtonPhoto Uploader5 年以前
I think you might be on to something, Andrew. I'll be working on it. Do you have some connection to this a/c?
Report

Andrew Rodriguez5 年以前
yea sort of, I was in the 138th Aviation Company (EW), and served as a backseater in RU-21A, B and C Utes, and RC-12G Huron aircraft. The unit prior to my being in it, (I served 1984-1997) served in Vietnam and flew RU-21Ds and the RU-8Ds. They even flew RU-6A Beavers as well. I'm restoring on of the RU-21A's I flew in, and I'm really interested in restoring a RU-8D to flight as our next project.

cliff7315 年以前
I'm thinking that from the other photos that Greg has uploaded, one showing "CT" on the port side of the vertical stabilizer and the other showing "NG" on the starboard side of the vertical stabilizer, this aircraft might have been assigned to the Connecticut Army National Guard. Hence, if the original painted rudder were intact, we would be seeing "CT ARNG" or "CTARNG".

Here is another photo from the Air-Britain Photographic Images Collection site, attributed to and copyrighted by its photographer John Sullivan and taken in July 1991 at Cochise Community College in Arizona...

The rudder is present, but appears to have a coat of paint primer applied, obscuring any original markings.
Report

Greg ByingtonPhoto Uploader5 年以前
Thanks a bunch! I can/will see if I can find someone at Cochise College with some knowledge of this a/c.
Report

So, after its service (probably in the NG up in New England after Vietnam) it found its way to the aircraft boneyard in Tucson. Then, at some point it found its way down to the Douglas and Sierra Vista, AZ areas.

My co-worker called city hall in Huachuca City and found out that the bird is currently owned by George Nerhan who is a former HC mayor. His facebook page is here:

We don't know why he obtained it and why its parked where it is, but if I can find a way to contact him, maybe I can find that out.

I also sent an email to the aviation dept. at Cochise College to see if anyone there might have knowledge of this bird. I'll let you know if/when I get a response. That's about it for now.
Report

cliff7315 年以前
You're welcome, Greg, and good luck to you on this fact finding mission!!!
Report

Greg ByingtonPhoto Uploader5 年以前
If you do an Aircraft Serial Number Search for 57-6032 at...:

...you find the following:

So, if I'm reading this correctly, this bird was originally an L-23 (in 1952?), and redesignated as an (R)U-8D in 1962. Based on Andrew's info we know it was in Vietnam for some period, then came back to the US and eventually went to the boneyard in Tucson in 1979. (The Military Aircraft Storage and Disposition Center (MASDC) is now the 309th Aerospace Maintenance and Regeneration Group.) The MASDC number - UB061 - can be seen on the airplane now. Then it went to the Navy in 1981.

Hmmm... Still don't know how/when it got to the NG in New England and how/when it came back south to AZ. Anyway, still checking.
Report

Andrew Rodriguez5 年以前
My understanding that of the 40 or so RU-8Ds that returned from Vietnam, (1973?) some were stripped of mission gear, standard wing tips were reinstalled, (RU-8Ds had 3ft wingtip extensions and 6ft verticle dipole antennas on those wing tips) stripped of the OD paint and repainted in VIP livery and assigned to the various NG Bureaus. This would only be for less then a decade because by 1980 all of the Army's U-8 fleet ended up in the boneyard in AZ, with a few examples ending up at the former JW Duff Aircraft Salvage in Denver, CO.
Report

Greg ByingtonPhoto Uploader5 年以前
Thanks, Andrew. That certainly fits with what we know so far.
Report

Greg ByingtonPhoto Uploader5 年以前
A picture of the data plate is here:

Greg ByingtonPhoto Uploader5 年以前
It looks like this aircraft will be moving. See the following article in the local paper.