Watch as Piper Malibu slams into snowbank at Courchevel Altiport

提交时间：大约 1 年以前
Watch as the pilot of thise Malibu Piper slams into a snowbank after being unable to bring the aircraft to a stop at Courchevel Altiport in the French Alps. (www.gatechecked.com) 更多...

Roger Anderson 大约 1 年以前 1
I'll give you one cent as most of the things way still looks dryish.
回复 ↓•永久链接•Parent•Report

joel wiley 大约 1 年以前 7
Somebody went skiing a little earlier than anticipated. Call this one a ski excursion.
回复 ↓•永久链接•Report

Andy Cruickshank 大约 1 年以前 6
I believe the pilot must have landed at least half way up the runway. I have landed there and while it is only 1750 ft as I recall, it is a very steep upgrade and he was going very fast as he came over the apex. Glad that nobody appears to have been hurt.
回复 ↓•永久链接•Report

Tom Pera 大约 1 年以前 5
was a controller at So Lake Tahoe airport... 6200 feet elevation, 8600" runway... with storm approaching wind and turbulence over runway intense... Harrah's BAC111 landed in these conditions hit a snow berm and broke a wing.. Earl Scheib's son (I'll paint any car for $29.99) tried to land a Beech 18 under storm conditions... after porpoising on his first 2 attempts (then going around) he finally crashed into a snow bank on 3rd try.. nobody hurt in either accident... crash every 2 weeks in summer-downdrafts density altitude... mountain airports a challenge
回复 ↓•永久链接•Report

Chris B 大约 1 年以前 5
Stopping is always a problem when you carry too much speed.
回复 ↓•永久链接•Report

alex hidveghy 大约 1 年以前 4
And land long. On a notorious runway. You need to be “in the slot” or go-around. Simple.
回复 ↓•永久链接•Parent•Report

s s 大约 1 年以前 6
I would have just yanked on the parking brake to perform an instant 180, then firewalled the throttle thereby affecting reverse thrust to bring the plane to a gentle stop. Sounds legit.
回复 ↓•永久链接•Report

bbabis 大约 1 年以前 3
They're definitely F'd-GUYZ. The plane that flew them in is not going to fly them out.
回复 ↓•永久链接•Report

sharon bias 大约 1 年以前 3
This airport is always in the top 10 scariest airports to land at in travel articles, so I'm not surprised there was an accident. It's number 9 in this article. http://www.traveller.com.au/traveller-10-ultimate-landings-for-thrillseekers-gtnzhb
回复 ↓•永久链接•Report

Michal Novak 大约 1 年以前 1
It wasn't at 11:30, it was at 11:17.
It wasn't only minor injuries, one passenger left on a stretcher in an ambulance.
The main problem was the plane landed about 200 m after touchdown mark, almost at the top, so the hill didn't slow it down at all. Major pilot's fault, but AFAIK there's no go-around.

It took a few minutes to someone from the airport staff even notice the "crash" - in Courchevel there's often nobody in the tower. Ambulance arrived after ~30 minutes, about the same time as heli ambulance (looked like Augusta to me). Police was already there at the time.

The following morning they craned the piper out of the snowbank and put it next to the hangars. I saw just crumpled engine conver and a few scratches, from the distance nothing serious. Can't tell what about e.g. engine and there was a lot of snow on the windscreen, so I can't tell if it was cracked.
回复 ↓•永久链接•Report

Andy Cruickshank 大约 1 年以前 1
I believe this to be a good assessment of what happened. You are correct THERE IS NO GO AROUND after about a 1/2 mile final as there is nowhere to go. The snowbank was a better and softer alternate than Alpine granite. It is a long and very windy road to the Altiport even from the village which would account for the delayed ambulance. I do not know how much help was available from the bar where the incident was videoed. 1750 ft is 533 meters and if he was 200m late to land he was as you suggest well up the hill.
回复 ↓•永久链接•Parent•Report

Michal Novak 大约 1 年以前 1
Yes, almost at the top of the hill. Standard procedures aside, I believe go around would be possible for them if the pilot instead of touching down went full throttle. He apparently flared too early and then flew in parallel with the runway, not losing any height, so IMO he had enough momentum not to stall.

He'd have to look hard for some Alpine granite though, it snowed quite a lot that week :-) They removed snow from the runway no more than 2 hours before the accident. He also went over a large patch of leftover snow when he tried to brake and went into the bank with "thump" sound, rather than "bang", so the bank was rather soft.
回复 ↓•永久链接•Parent•Report

john doe 大约 1 年以前 1
Good grief - wasn't even close. With the speed he was carrying, going around would've been a snap.
回复 ↓•永久链接•Report

bbabis 大约 1 年以前 2
Not at that airport. All departures are in the opposite direction for a very good reason. He was committed and accepted the slow speed contact with snow over a high speed contact with granite.
回复 ↓•永久链接•Parent•Report

with a registration like (registered F-GUYZ) , i'm thinking it is a man hating woman pilot.
回复 ↓•永久链接•Report

joel wiley 大约 1 年以前 5
Good that you are thinking... maybe.
The 'F' indicates that it is a French registration.
It may or may not be randomly selected.
If it was selected as you hypothesize, why would it be in English?
Perhaps this indicates more about your thought processes than the owners,
回复 ↓•永久链接•Parent•Report

btweston 大约 1 年以前 5
You don’t seem to have a whole lot of respect for women.
回复 ↓•永久链接•Parent•Report 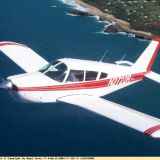 WALLACE24 大约 1 年以前 7
This one appears to be piston powered. Only turbine powered models have beta.
He was just too fast. Speed control is paramount on short runway, especially if at higher elevations.
回复 ↓•永久链接•Parent•Report

dkyoung 大约 1 年以前 1
I own a Malibu Mirage, which the article stated this was a Mirage. It's a piston, 350 horse Lycoming engine. When flight planning I tell ForeFlight to look for airports with at least 3000 feet of runway. I can easily land within 2000 in normal conditions. I've got 2300 hours in my logbook and can put my Malibu on the numbers most of the time. But this wasn't normal with snow and ice on the runway. I'd never attempt it in a Malibu. They eat a lot of runway unless all the numbers are right.
回复 ↓•永久链接•Parent•Report

WALLACE24 大约 1 年以前 1
Your Mirage and my Columbia 400 prolly operate about the same. 2000’ not a problem most times. I would say that day was not a good day for either plane to attempt it.
回复 ↓•永久链接•Parent•Report

dkyoung 大约 1 年以前 1
Absolutely. It appeared to me he didn't have full flaps either, but not sure. Looked to be only about 20 degrees, but hard to tell. I always land with full flaps.
回复 ↓•永久链接•Parent•Report

WALLACE24 大约 1 年以前 2
Maybe he landed with full and dumped them to get more weight on the wheels. But given this lame attempt I doubt it. Lol
回复 ↓•永久链接•Parent•Report

Cansojr 大约 1 年以前 1
Good point WALLACE24. As I understand that this airport requires landing training with an instructor. Courcheval demands a check ride to certify the qualifications lo land at this airport. You cannot just show-up and land. The Air Traffic authorities will deny you clearance to land. It really requires a turboprop to operate in an out the runway from hell.
回复 ↓•永久链接•Parent•Report

alex hidveghy 大约 1 年以前 3
Yes, even airline pilots require total familiarity and a check ride I n to difficult airports.
One I recall was Madeira(sp?) Funchal. There are many others. You gotta know what you’re doing.. it’s not a game.
回复 ↓•永久链接•Parent•Report

Andy Cruickshank 大约 1 年以前 1
Funchal is challenging but no comparison to Courchevel. Check out St Barts and Saba in the Caribbean. Saba is 1300 ft and has about 5 Twin Otter flights a day, as does St Barts. Ride of a life time!
回复 ↓•永久链接•Parent•Report

WALLACE24 大约 1 年以前 1
I know nothing about the airport except what was in the post. It said 1750’. Red flag 1. I don’t know the elevation but surrounding terrain suggests not near sea level. Red flag 2. Red flag 3 is some runway contamination. We all know the difference between ias and tas at altitude.
I have a twin turbo single engine piston. Wouldn’t even consider it at light weight.
I’m sure you are spot on. Don’t know what the pilot was thinking especially if he had the training.
回复 ↓•永久链接•Parent•Report

Andy Cruickshank 大约 1 年以前 1
Runway is 1750ft as stated. Elevation is 6600 ft. I flew in and out with a local instructor. One of my bucket list items! Incredible experience and I would do it again (supervised). What is not shown is a large wall of granite behind the snow bank that is about 60 ft (~20m) high. The runway has a 18 deg slope. TO downhill, Land uphill regardless of wind direction. Check out some YouTube videos. Safe if you are well trained and a cautious pilot.
回复 ↓•永久链接•Parent•Report